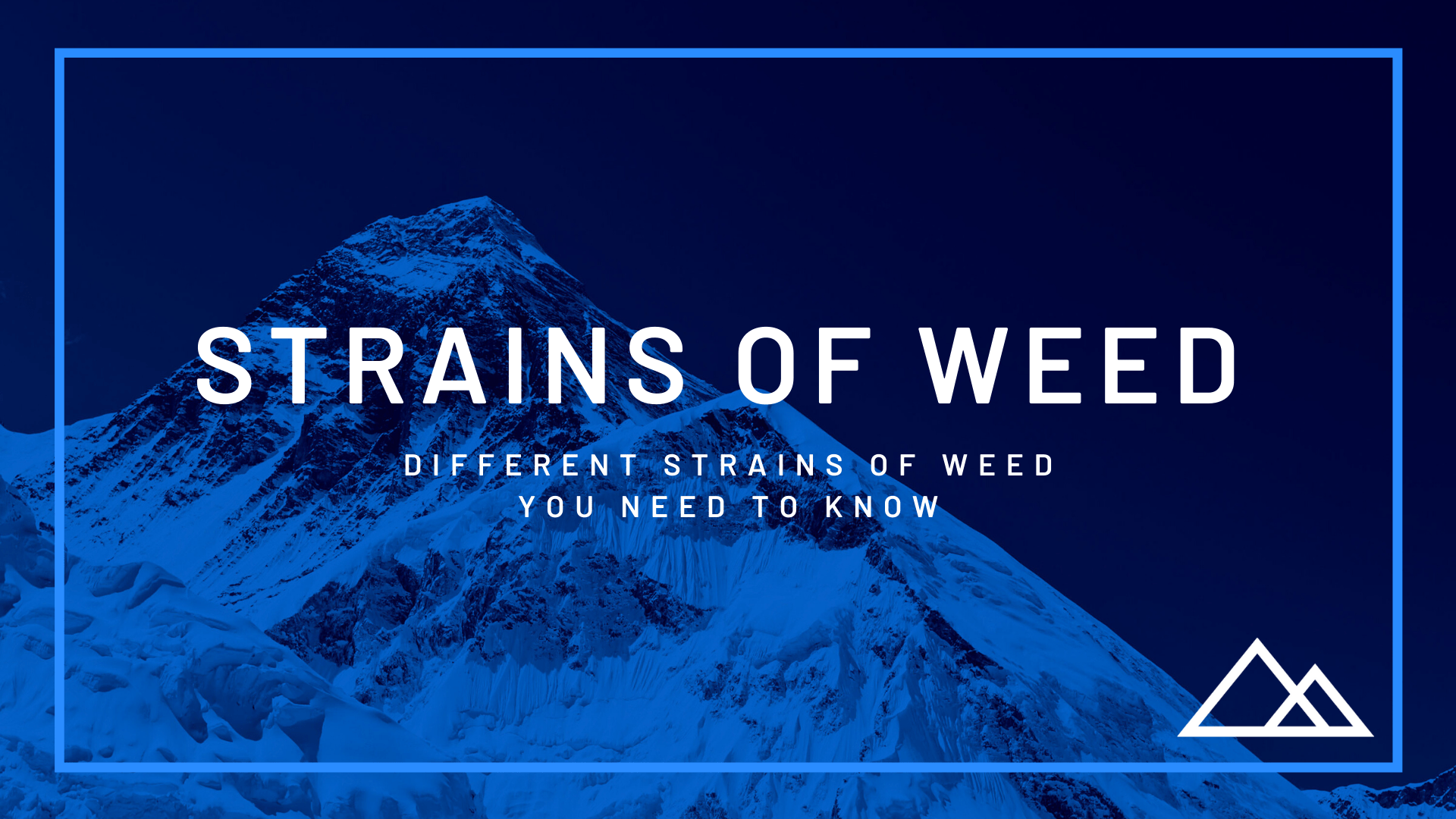 Weed, Bud, Flower, Cannabis, Mary Jane, the list goes on and on. In addition to many nicknames, marijuana has a variety of strains. Each strain can produce a different effect on the consumer.

There is so much information on cannabis and different strains of weed. Sometimes it’s incredibly hard to sort through the noise and find information that is concise, easy to understand and helpful. A lot of cannabis companies have talked about the different strains of bud. They have mostly categorized their products under the traditional indica, sativa, or hybrid strains without focusing on the specific strains that go along with each.

At Everest, we want to do our best to make sure you have the knowledge to choose the best strain of weed for you (and of course if you want help, you can come into any of our locations).

After reading this article, you will be able to understand the benefits from the different strains, why it’s helpful and how it affects you. You should be able to go into any dispensary and confidently purchase the best strain of weed for yourself!

Well, are you as excited as we are? Let’s get started!

Here’s something people won’t tell you.

Strains of weed aren’t actually determined by whether the plant is in an indica, sativa or hybrid. There are so many additional factors that go into determining a strain of weed.

Categorizing bud in three categories limits the amount of variety in the effects weed can produce. Also, by pigeonholing these strains of weed, weed distributors alienate people who have had one or a few bad experiences with a specific strain. More often than not, if someone has tried a strain of weed and reacted badly, they stay away. Unfortunately, it’s slightly irrelevant if the strain of weed is an indica, sativa or hybrid. What really matters is the way the plant is made up.

There are also marketing companies that will try to convince you that the three main strains of weed are the only way to determine what will and will not work for you. There are people out there who believe all cannabis plants are the same. However, there are actually many different strains of weed, all that have different properties and can lead to different sensations when ingesting and enjoying the effects.

Let’s begin with the different strains of weed.

Most people divide bud into three categories to start; indica, sativa, and hybrid, however, scientists are now arguing that these categories are irrelevant to strains of weed. Research is showing that by looking at the different strains of weed, there are not any chemical properties that differentiate one strain of bud from another in the plantlike form. The differentiating factors for different strains of bud come from the details in each flower. We will discuss more on that further on but to begin, let’s start with those over-marketed and heavily leaned on three types.

The way some people would describe indica was ‘in da couch’ meaning that a strain of indica would make you relaxed and sleepy however this isn’t the case for everyone. Some people have opposite effects that occur with strains of indica, instead of feeling relaxed, they start to feel anxious and more awake. Everyone reacts differently to bud and everyone needs to learn what works best for them. Generally, though, the different strains of weed tend to have the expected effects.

The three main strains of weed, indica, stative and hybrid act as umbrellas for a variety of bud strains underneath, that share property. There are certain strains of weed that are great for relaxation, some great at boosting productivity, and others that are a perfect mixture of both.

Hybrids are a combination of both that can provide an overall euphoric effect and a balance of both indica and sativa.

Indica is known to have relaxing effects and has been said to be great for a movie night or if you want help with pain relief or sleeping.

Physically, indica cannabis plants are shorter and bushier than sativa plants. The flowering cycle is shorter and the plants are a better fit for climates with shorter seasons.

Sativa is best known to assist with creativity and uplift spirits. This is best enjoyed in a social gathering, physical activities, and creative planning.

Sativa plants are longer and less bushy than indica plants. They have longer flowering cycles and are a better fit for warmer and more consistent climates.

A Deeper Look Into Strains of Weed

As we pointed out before, a lot of companies use these as buzzwords and they don’t have anything to do with the product being sold. The effects you feel from different strains of weed don’t necessarily come from indica or sativa, but from the cannabinoids, in the strain of bud you’re purchasing. Two of the most common cannabinoids in strains of weed are THC and CBD.

THC known as tetrahydrocannabinol, is responsible for increased appetites, relieving symptoms like pain, nausea, etc. and makes us feel high. CBD, known as cannabidiol, does not make you high and has been known to alleviate anxiety, pain, inflammation, and many other medical ailments.

THC Dominant: This is for patients looking for a euphoric experience. This is commonly chosen by patients who are experiencing pain, anxiety, insomnia and more. If you’ve tried THC strains and found that they make you anxious or uncomfortable, CBD strains might be best for you.

CBD Dominant: This is for patients looking for relief without any of the mental fog that sometimes comes with getting high. This strain of weed is also great for those who are incredibly sensitive to THC.

Balanced CBD/THC: This strain is just like hybrids. This gives a mild euphoria feeling from THC while also providing the relaxing effects of CBD. This is a great starting point for anyone who isn’t experienced with strains of weed but is looking to try out different options.

In short, terpenes are aromatic compounds excreted from fruit and plants like lavender, oranges, flowers, and of course, cannabis. The same area of the plant that produces the THC and CBD levels, controls the terpene level as well. The terpenes play a big part in differentiating the strains of weed (so much so that we built this cool terpenes spectrum).

There are so many different terpene profiles in strains of weed, we aren’t going to go over all of them but we are going to go over the most popular ones. There are four types that are most likely to occur: Myrcene, caryophyllene, limonene, and terpinolene.

Caryophyllene: Delivers a scent present in many herbs and spices like black pepper, oregano, and basil. It can smell similar to cinnamon and cloves with a spiced funky scent. The profile has a unique variety of potential health benefits because of its binding properties. When smelling strains of weed with this profile, many conclude that it has a musky and peppery scent. This strain has been known to help relieve anxiety. Some strains of weed with high levels of caryophyllene are; GSC, Bubba Kush, Sour Diesel, Chemdog, Candyland, Death Star, Original Glue, Cookies and Cream, Gelato, The White and Master Kush.

Limonene: The second most common terpene in nature gets its name from… you guessed it, lemons! Strains of weed and plants that produce high levels of limonene are extremely antibacterial and have shown antibiotic effects. These strains of weed have also shown strong abilities to help with anxieties and other mental health disorders. Strains of weed with limonene have been shown to help relieve depression, anxiety while also working to boost creativity. Some strains of bud that are known to have high levels of limonene are; Banana OG, Berry White, Black Cherry Soda, Cinex, Do-Si-Dos, MAC, Purple Hindu Kush, Quantum Kush, Strawberry Banana, Tahoe OG, Wedding Cake, and White Fire OG

Terpinolene: Known as a lurker, does not typically have a strong scent or presence in many strains of weed but is a complementary factor to other stronger profiles. Its scent profile is more complex but mainly smells like pine. A common word to describe the scent is ‘fresh’. Most strains of weed with terpinolene are THC dominant. Some strains of weed that are known to have terpinolene are; Dutch Treat, Jack Herer, Ghost Train Haze, Golden Goat, Golden Pineapple, J1, XJ-13, and Orange Cookies.

Why Understanding the Strains of Bud Is Helpful

There are so many reasons to understand the difference in strains of bud, why they’re different, and how they can affect you.

Let’s role-play for a second. Say you tried one strain of sativa once a little while ago. You had a really bad time and it made you incredibly anxious. Now because of that one time, you are convinced that you cannot handle any type of sativa. Did you happen to catch what cannabinoids and terpenes were present in that strain? If not, then you aren’t able to fully understand what you are and are not able to enjoy. Perhaps the next time you go to a dispensary, you will be able to try out different strains of bud to see which one works best with your body composition.

What about if you’re just starting to try bud and don’t know where to start?

Most people who aren’t aware of the different strains might head into a dispensary near them and just ask for an indica, sativa or hybrid. Budtenders do as much as they can to help you purchase the strain of bud that works best for you, but no one knows you better than you know yourself. You may have previously believed that indicas or sativas weren’t a good fit because of one bad experience.

Keep up-to-date with news and promotions by providing your information below.

Keep up-to-date with news and promotions by providing your information below.